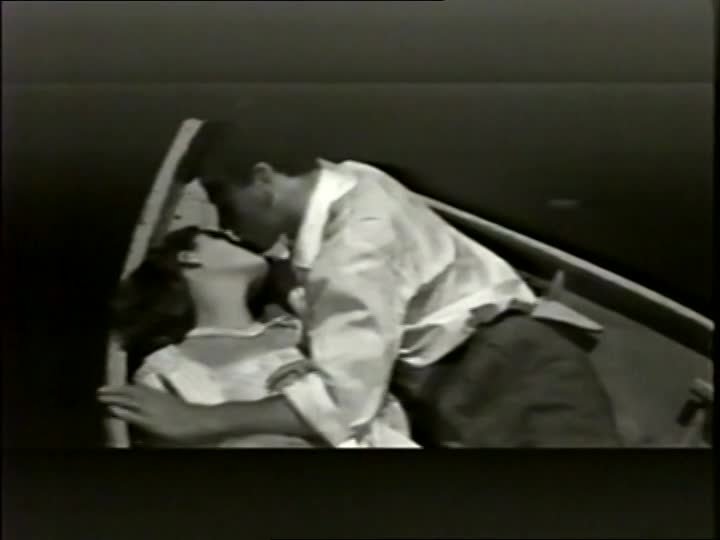 Madame Bovary’s Revenge is the first video Ellen Cantor ever put together. In this short work, she borrows a number of excerpts from Louis Malle’s 1958 masterpiece The Lovers. Jeanne (played by Jeanne Moreau) is married to Henri, who is too absorbed by his affairs to pay her much mind. Her only distraction is to go to Paris to her friend Maggy’s. Jeanne is captivated by Maggy’s social life. Eventually she takes a lover in Paris, Raoul, a polo champion who is also a man unwilling to sacrifice all for her.

Back from one of her trips to Paris, Jeanne is in her car when it breaks down. She makes the acquaintance of Bernard, who offers to drive her home. Henri, Jeanne’s husband, insists that Bernard spend the night. Unable to sleep, Jeanne goes downstairs and out into the surrounding park, where she meets Bernard. They stroll together and eventually make love throughout the night, first in a boat, then in the house.

In this film by Louis Malle, all the love scenes are merely suggested. The little boat moves off, for example, while the lovers kiss; later in a room, Jeanne’s hands shown gripping the bed sheets represent her sexual pleasure. In her video, Cantor only shows a few key passages from the film and cuts the original soundtrack. Through subtitles, however, she returns to the images the meaning they might have lost being severed from their context. Here the artist’s objective is to fill in everything that Malle could not show in his day by inserting in these elliptical sex scenes images borrowed from a classic of 1970s porn, Behind the Green Door, starring Marilyn Chambers.

The excerpts from the two films blend in a subtle way and produce, in the artist’s interpretation, a more realistic view of love that joins sex and emotion. Yet it’s clear that these two forms of discourse are incapable of either interfering with or complementing each other from the point of view of film, since the treatment of the subject, the camera angles and framing are totally different in the two types of cinema.

Jeanne’s leaving with the other man the next morning and her lack of remorse were extremely modern elements at the time of the film’s release. This is also what Cantor wanted to point out with the title she gave to her particular interpretation of the film.

DECODING The Mysteries of Antarctica (THE WHOLE TRUTH)